The Significance of the Easter Lily

The Easter Lily is bursting with symbolism. For centuries at Easter time, the white lily has been used as decoration in Christian Churches, given as gifts, and adorned in homes.

Known to some as the “white-robed apostles of hope,” white lilies are believed to symbolize the purity and innocence of Christ.  The white color signifies peace, hope, and purity.

The fragrant flower emerges from an ugly bulb planted in a ground, which acts as a symbol of the resurrection and new life, just as Jesus emerged from the tomb after his brutal death.  The Easter lilies act as a reminder to celebrate this joyful season of renewal and rebirth.

The trumpet shape of the Easter lily also fit into the image of a trumpet sounding the message that Jesus had risen and thus loss becomes a form of rebirth too.   Lilies are mentioned in both the Old and New Testaments of the Bible.

Adding another layer to the lily’s significance is the fact that they are also associated with funeral services. They portray the innocence that has been restored to the soul of the departed.

The Easter lily came to the United States from Japan. Following World War I, a soldier named Louis Houghton brought lily bulbs from Japan back to the U.S., specifically to his home state of Oregon. Houghton gave the lily bulbs to his horticultural friends, and in a short time, the area along the California-Oregon border became the source of this highly sought-after flower.

Today, a small coastal stretch between the Harbor-Brookings and Smith River in Curry County Oregon and California’s Del Norte County, respectively, has come to be known as the “Easter Lily Capital of the World.”  It is commonly cited that 95 percent of the entire potted Easter lily market comes from this region. 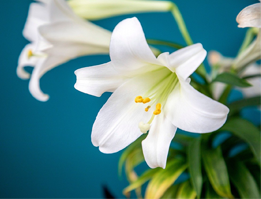 To keep your potted Easter lily as its best, it prefers a cool daytime temperature of 60° to 65° F. and nighttime temperatures 5 degrees cooler. To keep the flowers from wilting, avoid placing the potted plant in direct sunlight. Most plants will lean toward the sunlight. To keep the plant growing upright, turn the pot every two days.

Keep the soil moist, but not soggy. Most Easter lilies are sold commercially in pots covered with decorative foil jackets. Remove the pot from the foil covering every time the plant is watered because no water should be left standing at the bottom of this covering. Once the water has soaked into the soil, return the pot to the foil covering.

Also, to help your potted lily thrive, do not place the pot near a direct source of heat. Lilies thrive in a humid climate, more so than a dry one. To create natural humidity, fill a saucer with small pebbles and water and set beneath the potted lily.

How to Transfer Easter Lilies to the Garden

Your Easter lily plant can be introduced into your flower garden for annual enjoyment. Transplant it outdoors once all danger of frost has passed and when the flower stops blooming.

The plant needs to be in well-drained soil, just as it did when it was potted. To provide the needed drainage, add peat moss and perlite to rich organic soil.

Plant the lily bulbs, roots down, 3” inches beneath the surface of the soil and water. If planting more than one bulb, position them at least 12” inches apart. Cut back the stems once the plant appears dead. This will cause new growth to begin and possibly another bloom this summer. Next year, look for a June or July bloom.

Remember: all lilies are poisonous to both cats and dogs. If you have pets, it’s best to skip keeping lilies in the house. If you must, keep them away from where pets can reach them! 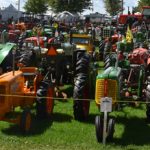 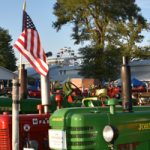 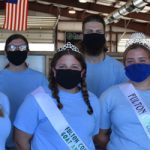 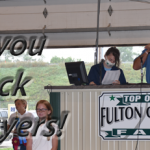 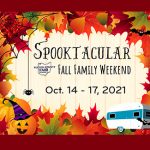